We hope you can join us to celebrate performing again and enjoy an evening of your favourite opera choruses sung by the Christchurch City Choir and your favourite arias sung by three world class opera singers with Jeremy Woodside on piano.
Conductor Dr John Linker.

Consider spending time before or after the concert enjoying the Tīrama Mai Bringing the Light Festival in the city which is a free event celebrating Matariki DETAILS. 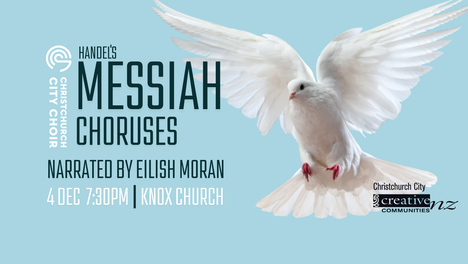 ​Handel's Messiah Choruses
7.30pm 4 December 2021 at Knox Church (Corner Bealey Ave and Victoria St)
After sadly cancelling our Annual Messiah at Christchurch Town Hall  Concert with Sponsors John Rhind Funeral Director and Cunningham Taylor Law by popular demand we bring you Handel's Messiah Choruses with Narration by Eilish Moran.  This is a special opportunity for friends, family and supporters to welcome the festive season.  With strictly limited capacity you must book early.  This concert is being made possible with support from Christchurch City Creative NZ Communities.

Brahms' A German Requiem- POSTPONED DUE TO COVID LEVEL 2 RESTRICTIONS
It is with great disappointment that we announce the postponement of our forthcoming Brahms concert A German Requiem.  In order for the rehearsals and concert to go ahead, Christchurch must be in Covid Level 1. At this point, we are not confident enough that this will be the case in time.
This is very disappointing for all the singers, sponsors and teams involved in the concert who have worked so hard to prepare and rehearse, and we're sorry to disappoint all of you who were looking forward to it.  We will work hard to find an alternative date.
We hope to see many of you at Last Night of the Proms on October 30th and our Messiah concert on December 4th and thank you for your continued support of the choir.
​A big thank you to our Concert Sponsors: South Island Heart and Mitre 10 Mega Ferrymead and with support from Kiwi Gaming Trust.

Join us in our 30th Anniversary Year to celebrate the contribution of female composers to choral music through the centuries.

Conductor Dr John Linker  has selected music that represents some of the finest works in the repertoire by female composers for Christchurch City Choir as they perform for the first time in the beautiful chapel at St Andrew's College and featuring tenor Adrian Lowe and Organist/Pianist Jeremy Woodside.
Conductor Dr John Linker
Concert Sponsor: Ryman Healthcare
With generous support from the Roy Owen Dixey Trust and CNZ Creative Communities

​Tickets through Eventfinda and door sales on the night from 5.30pm with eftpos available.  Plenty of street parking nearby.
​Adrian Lowe  -Soloist

Adrian has performed to critical acclaim across the globe, in the USA, Canada, Israel, and New Zealand, as well as throughout Europe and the UK.  He has performed an extensive repertoire and can be heard performing on feature films, TV programmes and recordings that include repertoire from Ludford, Monteverdi, Byrd, Tallis, Purcell, Bach, Handel, and Mozart through to Duruflé, Britten, Howells, Poulenc, and Villette.

In his freelance career, Adrian has performed with some of the world’s leading vocal ensembles, including; The BBC Singers, European Voices, The Euterpe Baroque Consort, The Gabrieli Consort, The Huelgas Ensemble, I Fagiolini, The Netherlands Bach Society, The New London Consort, The Oxford Camerata, Polyphony, The Sixteen, and Tenebrae.  He has worked with conductors and orchestras such as Harry Christophers, Mark Elder and The Hallé Orchestra, Stephen Layton and The Academy of Ancient Music, Kurt Masur and The London Philharmonic Orchestra, Andrew Parrott, Philip Pickett, Paul van Nevel, Sir Simon Rattle and the Berliner Philharmoniker, Jeremy Summerly and Jos van Veldhoven.
Jeremy Woodside -Organ/Piano

Jeremy was born in Christchurch, New Zealand, and his musical life began as a chorister at ChristChurch Cathedral; he was later Assistant Organist.  He has held organ scholarships at Wells Cathedral and Westminster Abbey and has directed and accompanied many choral societies and choirs.
In 2011, Jeremy directed the Cathedral Choir for the National Memorial Service in Hagley Park following the February earthquakes, in the presence of HRH Prince William.  He also gave a number of solo recitals throughout Europe to raise money for the cathedral’s appeal and has released three solo CDs on the ChristChurch Cathedral organ.
Jeremy graduated as a Bachelor of Music (First Class Honours) from the University of Canterbury, and while there was awarded the Lilburn Prize for composition and Madrigal Prize for Excellence in Vocal Music.  Later he completed a Masters in Organ Performance at the Sydney Conservatorium of Music.  In August 2013, he gave the inaugural recital at the Transitional Cathedral in Christchurch.
His organ tutors have included Daniel Moult, Thomas Trotter and David Briggs, and Jeremy gained his Fellowship in Organ Performance from Trinity College, London in 2009, and holds an Associate Diploma from the Royal College of Organists.  As a recitalist/accompanist, he has performed in many major UK cathedrals, St George’s Chapel Windsor, Notre-Dame in Paris, as part of the International Organ Summer Festival in Rome, and the Musikverein in Vienna.
Recent engagements include Westminster Cathedral, Malvern Priory, Christ Church Priory Dorset, St Andrew’s Cathedral Sydney, Westminster Abbey, Saint-Saens’ 3rd “Organ” Symphony with the Christchurch Symphony Orchestra in Christchurch Town Hall, St Paul’s Cathedral Melbourne, and Esplanade Singapore as part of Tapestry: a festival of sacred music.  From September 2015 – March 2018 Jeremy was Head of Keyboard and Organist at Repton School.
Jeremy regularly performs with the Christchurch Symphony Orchestra, both as a soloist and orchestral player.  He is an active composer with various pieces being published by the RSCM, SOUNZ and Crescendo Music Publications in Melbourne, Australia, and is the current accompanist for the Christchurch City Choir.

As autumn’s seasonal change brings about warmer colours outdoors, enjoy a cosy evening inside with us at the recently opened Aldersgate Centre.

Christchurch City Choir along with conductor Dr John Linker, organist Jeremy Woodside and members of Addington Brass join to celebrate the work of Haydn, Beethoven, Shearing, and Rutter as part of the Choir’s 30th Anniversary year.  Works featured include Rutter’s Gloria, movements from The Seasons by Haydn, Beethoven’s Hallelujah (from Christ on the Mount of Olives) and Shearing’s setting of Songs and Sonnets of Shakespeare.

We are a diverse group, ranging in age from 14 to 67.   We currently rehearse in our own Band room in Vulcan Place, on Monday and Thursday.  We have a small learning group that we would like to add to – for information email committee@addingtonbrass.com

Changing Seasons has received funding from The Southern Trust.
​