Messiah 2018
Review by Christopher Moore
​
Christchurch’s annual performance of The Messiah has always been a signal that Canterbury’s Christmas can begin. However, after decades of presenting the work, has it evolved into a sweetly polite musical ritual or an opportunity to understand and expand a contemporary appreciation of what Handel’s enduring oratorio can be and achieve?

It is easy to diminish the powerful emotions that fuel The Messiah – and few other composers have employed music to fully convey drama, sorrow, joy and collective enthusiasm as George Frederick Handel. But a 21st century Messiah’s ultimate emotional – and spiritual – impact demands a sense of adventure and risk taking to avoid becoming a musical cliché.

Christchurch 2018 performance featured the Christchurch City Choir, members of the Christchurch Symphony Orchestra and soloists (sopranos Madison Nonoa and Anna Pierard, Simon O’Neill, tenor and Joel Amosa, baritone) under the musical direction of John Linker. Martin Setchell played the continuo organ while Grant Bartley was at the harpsichord.
The performance was in St Margaret College’s Charles Luney Auditorium. While the auditorium has served a vital and invaluable role since the 2011 earthquakes, there’s a constant risk that its confined space and slightly flat acoustics could hamper a performance, especially in a large-scale work like The Messiah. Musicians and singers must pull every stop out to tame the beast and overcome the physical restrictions.

Perhaps this reason was why Part One, despite some powerfully sung solos, threatened to become a polite but conventional experience. Some of the choruses, notably For unto us a child is born and Glory To God  appeared to lack energy.  Admittedly, the work’s first part can be regarded as a prologue but there were moments when the choir seemed to be singing from the score rather than its collective heart. Everyone appeared to be cautiously feeling his or her way.

It was left to the soloists to fuel the performance. Simon O’Neill’s burnished gold tenor and operatic technique made arias like Comfort ye my people a satisfying experience while Joel Amosa’s sumptuous baritone and engaging technique showed why he won this year’s Lexus Song Quest. Madison Nonoa’s soprano was a revelation as it sparkled, swooped and soared, obviously relishing Handel’s operatic flourishes and melodic ornamentations. Anna Pierard meanwhile injected a quiet dignity and strength into her solos.
We’ll never know what was said during John Linker’s team talk at half time but it soon became apparent that this was going to be a performance of two halves. An re-energised choir plunged into the music and words with a real sense of attack and vigour. Even familiar Hallelujah Chorus contained a ferocious strength and purpose (and, yes, the audience stood. Christchurch knows its musical etiquette.)  The evening was suddenly transformed from the merely competent to the sublime.

The Messiah’s real drama is played out in its second and third sections where Handel’s genius emerges in arias ranging from the spiritual desolation of He was despised, the marvellous martial bustle of Why do the nations and some of the greatest choruses ever written.
Arguably the evening’s climax arrives in the final chorus, Worthy is The Lamb with its monumental fugal passages ending in a massive Amen. It’s an immensely powerful culmination of the oratorio’s entire spiritual and musical message. For the great Amen Linker fused the soloists with the choir, increasing the musical textures from a gentle beginning to overwhelming waves of sound. It was an extraordinary affirmation of everything Handel was communicating and a transformed performance that fully deserved the audience’s lengthy standing ovation.
​
Next year, all going according to plan, The Messiah will be back where it belongs in the restored and renovated Christchurch Town Hall. Hallelujah! 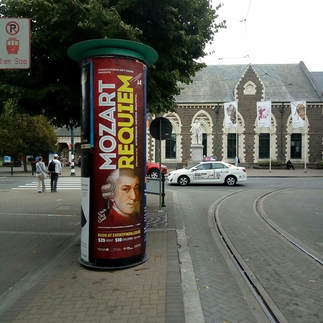 ﻿﻿Timaru Concert
Saturday 10th September 2016
Sacred Heart Basilica, Timaru
John Linker conducted the choir and played organ in an intimate afternoon concert in Timaru to an apreciative audience, some of who came on the road trip with the choir and thoroughly enjoyed the experience of hearing the choir in the wonderful acoustic.

Canterbury Anniversary weekend saw the choir premiere a specially commissioned piece at a free concert at the Air Force Museum at Wigram. The choir and Addington Brass joined together to perform the world premiere of ‘Pro Patria’, a work for choir and brass band composed by Dr. Philip Norman. The commemorative work used texts from WWI poetry and was commissioned with a grant from the Lottery Grants Board WW100 Fund.
The concert was well attended and the enthusiastic crowd joined us in a sing-along of WWI patriotic songs, as well as hearing other music performed by Addington Brass and the choir.
War Requiem
Saturday 3 October 2015
Air Force Museum of NZ, Wigram

Presented by the Christchurch Symphony Orchestra in association with the Christchurch City Choir, Britten's War Reqiuem is a work of profound emotional and moral depth that has become regarded as one of the great choral works of the 20th century.